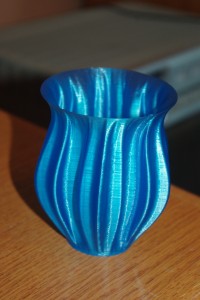 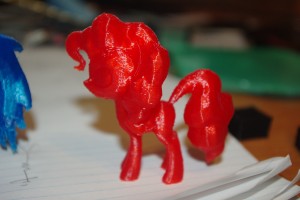 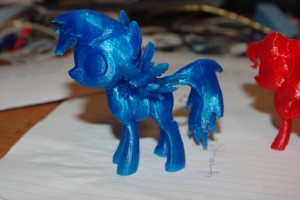 As promised in my previous post, I have uploaded the gerbers, schematic, and bill of materials for the 3D Printer Stellaris Launchpad Booster Pack.  I have also uploaded the firmware to Github for others to use.   The firmware is released under a GPLV3 license and is available here:  http://www.github.com/mroy/stellarap

Above you can see a couple of prints that I have done on my printer.  The first is a scripted vase and the second two are a couple of My Little Pony models (Pinky Pie and Rainbow Dash).  All of the above models are from thingiverse, a great source for printables.   Note that the pony models were fairly time consuming because of the complex supports required for the tail, hair and wings.

The RAR file above includes the following files:

Note that I forgot to include an outline on one of the mechanical layers, but it shouldnt be too hard to figure out from the outline of the polygons on the top/bottom layers.

Also note that this board design is designed for DIY PCBs.  There are no hidden vias which makes it possible to stitch vias with a piece of wire and not having to worry about putting an IC on top of a solder blob.   Also, note that the driver ICs do not have the greatest thermal pads because I was restricted to not using any thermal vias beneath them and since I was also soldering this by hand, I had to include a thermal relief connection to the pad beneath each driver IC.  This allows them to be soldered by tinning the bottom pad of the chip, tinning the pad beneath the chip, applying lots of flux, and then heating up the entire thermal pad with a soldering iron tip while the chip is on the pad.  This seems to work OK, but I have also added a large chipset heatsink from an old mother board that sits on top of all four driver chips with a bit of thermal compound.  The heatsinking seems to work fine for keeping them cool at the currents that I am running them.

If you are going to have this board manufactured properly, I would highly suggest adding thermal vias beneath the driver ICs and removing the thermal reliefs.   This should eliminate the need for a heatsink entirely.  Also use 2oz copper if you can.

The hardware also includes a 3.3V regulator that is meant to provide power to the Launchpad.  For this reason, you should remove the jumper on the LaunchPad that connects the USB power to the onboard regulator and make sure that the switch is set for device power.

Notes on the Bill of Materials:

The BOM lists the driver chip as A4984, but the A4982 should be used instead as it has better microstepping.

C12 and C23 are 100uF aluminum electrolytic capacitors.  Anything ~100uF or larger that seems to fit in the hole spacing and has at least a 12V voltage rating should be suitable for these.

Also, take a look at the schematic and you will need to tune the current with two resistors for each stepper.   Do not run them with too much current or you will risk overheating your steppers.   I think I am running mine at around 800 – 1000mA.   I have the extruder and z axis a bit higher than the X and Y.  Also, in the firmware I may have switched around which axis is which for the drivers on the board.

As mentioned in the summary, the firmware is available here:

The README.md file from the repository is copied here for your reference:

Stellarap http://www.stellarcore.com/ This is a firmware for a stellaris launchpad based controller for a 3D printer.

License: The Stellarap code is licensed under the GNU GENERAL PUBLIC LICENSE, Version 3, 29 June 2007. The license is available here http://www.gnu.org/licenses/gpl-3.0.txt and is also provided in the accompanying LICENSE file. This License MUST be included in all distributed versions of this code. All of this software is provided AS-IS with no implied warranty or liability under sections 15, and 16 of the GPL V3. If your printer burns down your house, it’s not my fault.

Stellarisware Software Package (since renamed to TivaWare): This software library includes functions and libraries for many of the on-board peripherals used in the chip.
The library has also been compiled and optimized in the ROM that is available on the chip itself, meaning that library calls to TivaWare functions cost no program memory. It also includes some special initialization stuff that is needed for the particular ARM core in the chip. http://www.ti.com/tool/sw-tm4c

C Libraries I have used my own compiled version of Newlib to provide libc.a and libm.a which provides some standard C functions as well as math functions. It is likely that you will be able to find a pre-compiled version of newlib or even use the version that is included with the toolchain (above). http://sourceware.org/newlibhttp://eehusky.wordpress.com/2012/12/17/using-gcc-with-the-ti-stellaris-launchpad-newlib/

Recommended Software: OpenOCD compiled with support for the TI Link This is a great software that I use to debug with the Stellaris Launchpad. It allows you to use the built in TI Link that is on the development board with the GDB included in the GCC toolchain. Instructions for building/using the Stellaris Launchpad with OpenOCD are here:http://processors.wiki.ti.com/index.php/Stellaris_Launchpad_with_OpenOCD_and_Linux

Build Instructions: Set your path to include your compiler toolchain.

Acknowledgements: Great thanks to the folks in irc.freenode.net/#reprap for the help to understand 3D printing and for helping me to understand what the firmware should be doing. Special thanks to Kliment for his help explaining the Marlin firmware, which my firmware may bare a striking resemblance to.

A brief description of the files included in the repository:

Finally, I would like to mention that if you would like to try out the firmware without actually building a machine and you have a Stellaris Launchpad kicking around, you can build and program the firmware and it will emulate a printer with the three RGB led, each colour corresponding to the X,Y, or Z axis.

22 thoughts on “Stellarap Firmware and Hardware”